Blog - Latest News
You are here: Home / Chemistry / How to make Slime

Slime is one of those easy-to-do, fun activities that never gets old. There is something that everyone loves about making a substance that is gooey and gross. It always reminds me of Halloween and of course, chemistry and polymers.

Slime is an excellent example of a polymer. Polymers are large molecules consisting of repeating identical structural units connected by covalent chemical bonds. Polymers can be naturally occurring or manmade. Manmade polymers are materials like nylon, polyester, and polystyrene. Examples of naturally occurring polymers are proteins in our body like tubulin and actin. These proteins make up microtubules and microfilaments that serve as structural components within our cells.

Storage and Safety Guidelines:
Store Slime in an airtight container for about 3 weeks of use. Slime is non-edible. When you are through with it, discard in a trash container. Do not wash down the drain.

Slime is a polymer. Polymer is a term used to describe anything that consists of repeating identical structural units. It basically is like a long strand of spaghetti and the long chains flow past each other with ease. They can be naturally occurring or man-made (synthetic). Examples of polymers include plastics, starches, sodium polyacrylate, nylon and many more. Slime is also considered to be a non-Newtonian Fluid, basically a fluid that has special properties.

You should answer the following questions when exploring the properties of slime (a.k.a. playing with the cool stuff). Make sure your record your observations and post them in the comment box below. Try and do this before you read the rest of the article. 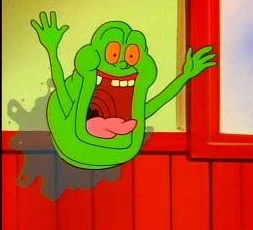 Slime as a toy dates back to the 1920’s, when chemist Hermann Staudinger was researching polymers. He was the first one to try and make long cross-linked chains of the molecules instead of circles. This allowed the polymer to be slippery and gooey. By the 1930’s other scientists used his polymer model and synthetic polymers began to be studied and created. But it wasn’t until the 1980’s that slime began to be sold in stores as a toy for children. Ever since then you can’t step into a toy store without seeing the gooey, oozy stuff on the shelves. The slime you find in the store and the slime you can make with this recipe are both non-Newtonian fluids. Did you try to make it and answer the questions about its properties? If so, read on to find out about non-Newtonian fluids.

What does non-Newtonian mean?

All fluids have a property known as viscosity that describes how the fluid flows – commonly thought of as how thick or thin a fluid is. For instance, honey is much more viscous than water. When a fluid’s viscosity is constant it is referred to as a Newtonian fluid. Slime is an example of a fluid whose viscosity is not constant, it changes depending on the stress or forces applied to it. If you pull it apart real hard and apply a large force, it becomes very viscous and will break in half. If you gently pour it, applying little force, it will flow like honey or molasses. This kind of fluid is called a dilatant material or a shear thickening fluid. It becomes more viscous when agitated or compressed.

Another non-Newtonian liquid is ketchup. Ketchup behaves in just the opposite way from Slime. It becomes less viscous when agitated. Liquids like this are called thixotropic. If you leave a bottle of Ketchup on a shelf, it becomes thicker or more viscous. Nearly everyone has experienced this while trying to pour the liquid from a new bottle – it refuses to move. If you shake the bottle or stir it up it becomes less viscous and pours easily. Another example of a non-Newtonian fluid is Oobleck, one of our other great activities.

Is the slime in the store made using this recipe?

Most commercially sold slime is made using polyvinyl alcohol (PVA), a non-toxic substance that gives slime its texture. PVA still needs to be mixed with borax to get the final slime product. The borax is a gelling agent that cross links the PVA molecules together to form the slime. Borax does the same thing with the glue in this recipe. You can find Borax in the laundry detergent aisle in your grocery store. It is an inexpensive laundry booster and has lots of great household uses.

Other sources about slime:

There are some fun books that discuss animals in nature that produce their own slime, science experiments and other fun facts. You can find these and many other books at your local library.

Make sure you try this at home and don’t forget to come back and write a comment about how it went. 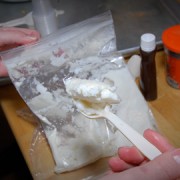 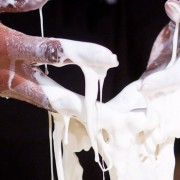 How to make Oobleck 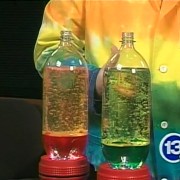 The Amazing expanding bar of soap

Make a non-toxic lava lamp at home
Scroll to top